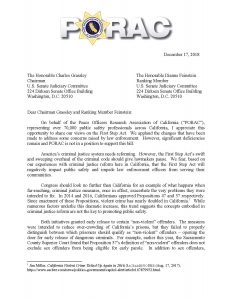 As longtime opponents to AB 109, Proposition 47 and 57, it would be inconsistent to now support a federal version of these bills. PORAC relayed our concerns to those involved in the crafting of this legislation and the advocates have taken some steps to improve the bill. Yet, a number of serious felonies, including violent crimes, are still eligible for early release.