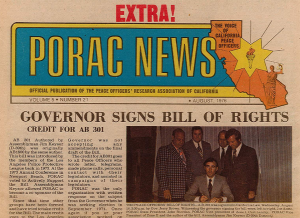 By Rick Baratta AB 301: The Peace Officers’ Bill of Rights In 1973 a bill (AB 1800) was proposed that would extend civil rights to officers, which PORAC supported. In 1974 PORAC amended this legislation and joined with the Los Angeles Police Protective League (LAPPL- not a PORAC member) to cosponsor the “Policemans’ Bill of […]