Contact Information:
Angie Gonzales
(800) 937-6722
E-Mail
Cancellations:
If you wish to cancel OR change your registration for the PORAC Conference, we MUST receive the request, through our Online Change Request Form, no later than November 12, 2021 (7 AM) to update or receive a refund.
NO refunds will be granted after the cut-off date.
SCHEDULE OF EVENTS

The Bulletproof Mind for Law Enforcement

Lt. Col. Dave Grossman is a former US Army Ranger, paratrooper, and West Point Psychology Professor.  He has a Black Belt in Hojutsu, the martial art of the firearm, and has been inducted into the USA Martial Arts Hall of Fame. Col. Grossman’s research was cited by the President of the United States in a national address, and he has testified before the U.S. Senate, the U.S. Congress, and numerous state legislatures.  He has served as an expert witness and consultant in state and Federal courts. He helped train mental health professionals after the Jonesboro school massacre, and he was also involved in counseling or court cases in the aftermath of the Paducah, Springfield, Littleton and Nickel Mines Amish school massacres.

Legally Justified, but was it Avoidable?

Jonathan S. Davis is a senior instructor for Calibre Press, a nationally recognized law enforcement training organization that has trained more than 1 million officers over its 40-year history. Jon began his career in law enforcement 20 years ago.  He served as a Granville, OH Police Officer for 5 years and has spent the past 15 years with the Ohio State Highway Patrol where he currently holds the rank of Sergeant.

Sgt. Davis has worked with Criminal Patrol Teams, Ohio State Patrol Investigations Division and is an Academy Instructor for the Ohio State Highway Patrol.   He is currently the Course Director for Emergency Vehicle Operations and designed and implanted an Emergency Vehicle Operations Training Program for the OHSP that was so successful, he now instructs other Ohio Law Enforcement agencies in this program.

As an Executive Board Member of the nationally recognized “Below 100” campaign, Sgt. Davis has been instrumental in bringing that program to the State of Ohio.  Jon is also on the Executive Board for the Association of Law Enforcement Emergency Response Trainers (ALERT) holding the position of Vice President.   Sergeant Davis is a Master Instructor and Train-the-Trainer for numerous training programs.

Sgt. Davis serves as a Subject Matter Expert Consultant for a nationally recognized Fortune 500 company that provides agencies and officers with support and resources designed to improve career and quality of life. 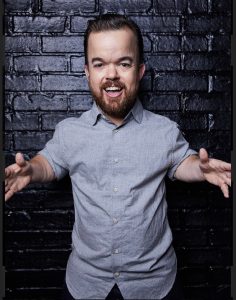 Pound for pound, Brad Williams is the funniest comedian in the country right now, and has become one of the most in-demand comedians working today. A California native, Williams started doing stand-up comedy as a teenager and has been touring successfully ever since, routinely selling out shows all over the country and the world.
Williams has parlayed that success into a multitude of stand-up television experiences, including The Tonight Show, Dave Attell’s Comedy Underground, and Jimmy Kimmel Live. Hia first one-hour special, Fun Size, was the highest-rated special on Showtime, and a year later, he followed that up with his second special, Daddy Issues, which was more successful than the first and prompted
The New York Times to write “No one is doing it [stand-up comedy] more hilariously than Brad Williams.” His third special in three years was an uproarious one, hosting some of the edgiest comedians in the country from the prestigious Montreal Just For Laughs Festival. Recently, his groundbreaking special on Netflix The Degenerates, garnered huge ratings and rave reviews…Learn More