In 1970, California had done little to honor the final sacrifices made each year by its fallen peace officers. The federal government had already declared May 15 as Peace Officers Memorial Day, but recognition by the state had not followed. Finally, at the urging of Abraham Sussman, who had been instrumental in campaigning for the national memorial day, the issue was brought to the attention of the state and PORAC.

Under the presidency of Kenny Joseph of La Mesa, PORAC encouraged Senator Jack Schrade, Chairman of the important Senate Rules Committee, to introduce a resolution that would officially establish May 15 as California Peace Officers Memorial Day, and the week in which May 15 occurs as Peace Officers Week. Senate Rules Resolution Number 137 was adopted on May 20, 1970. The resolution concluded: “RESOLVED, That a suitably prepared copy of this resolution be transmitted to Mr. Kenneth W. Joseph, president, Peace Officers Research Association of California.”

PORAC was therefore instrumental in establishing California Peace Officers Memorial Day, but more than this seemed necessary to emphasize the significance and importance of the occasion.

In 1975, Joe Aceto of San Bernardino County Sheriff’s Department was elected to the presidency of PORAC. Aceto, along with PORAC Director Walter Colfer, also of San Bernardino Sheriff’s Department, met with Rick and Don Baratta to discuss the issue of a memorial. Rick Baratta, former chief of police, was then a consultant with POST and a liaison to PORAC. Rick’s brother Don would later write articles for the PORAC Law Enforcement News.

It was decided at this meeting that another resolution should be introduced, calling for a memorial containing the names of California peace officers slain in the line of duty to be erected in a “prominent location near the entrance of the State Capitol.” Walter Colfer wrote the resolution and Senator Robert Presley, former undersheriff of Riverside County, introduced it as Senate Concurrent Resolution 94 on April 6, 1976. It passed without opposition. In the resolution, the memorial was not specifically described. This was done purposely so that there would be no controversy to impede its successful passage. 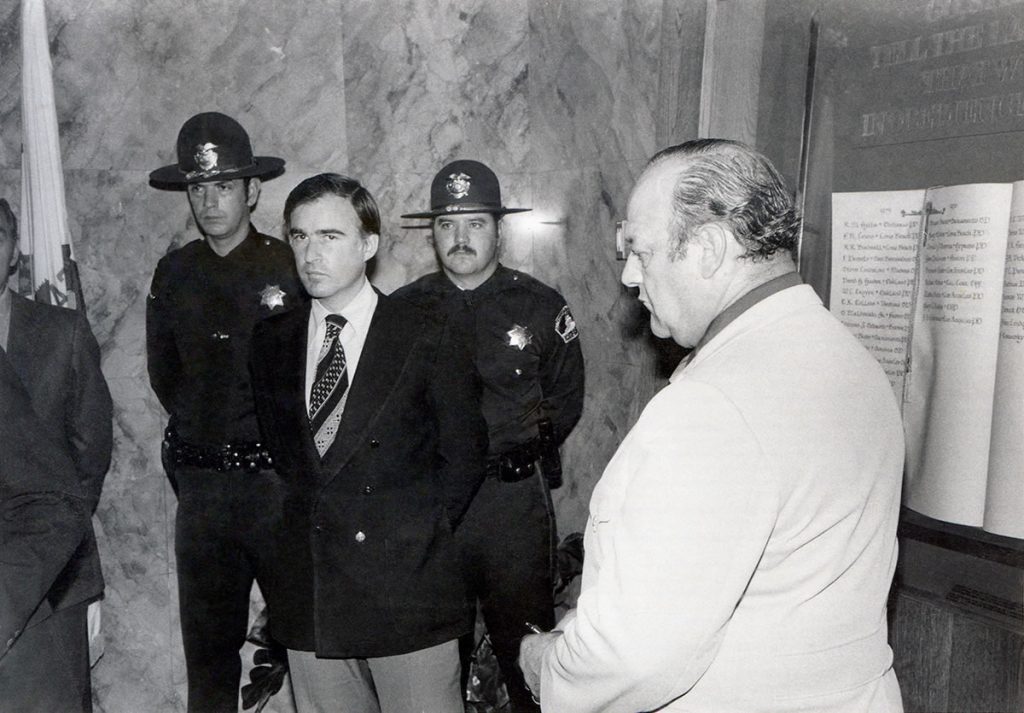 Before the year was out, Rick Baratta was employed by PORAC as the General Manager, and Joe Aceto won another term as President. One of the first orders of business was to raise money and construct a memorial to comply with the Senate Resolution. Rick and Don Baratta designed the memorial, and PORAC asked the state’s police departments and associations to send in the names of officers who had died in the line of duty, and to contribute money to build the memorial.

The names came pouring in, some from the last century, a total of nearly 1,000. The money came in a bit slower, from donations of a single dollar to $1,000 each from the California Association of Highway Patrol Officers and the California Correctional Peace Officers Association.

The design of the memorial called for the names of the officers to be recorded in a large leather and vellum book, flanked by two large medieval swords. Dave Keenan built the memorial case. Dick Calonder handcrafted the book, and Brenda Walton painted the illuminated design and inscribed by hand the names of the officers who had died in the line of duty. Swords of the designated type were not available, so Don Baratta carved them from wood and had them cast in bronze and plated. He also carved the handles of the swords from rosewood. 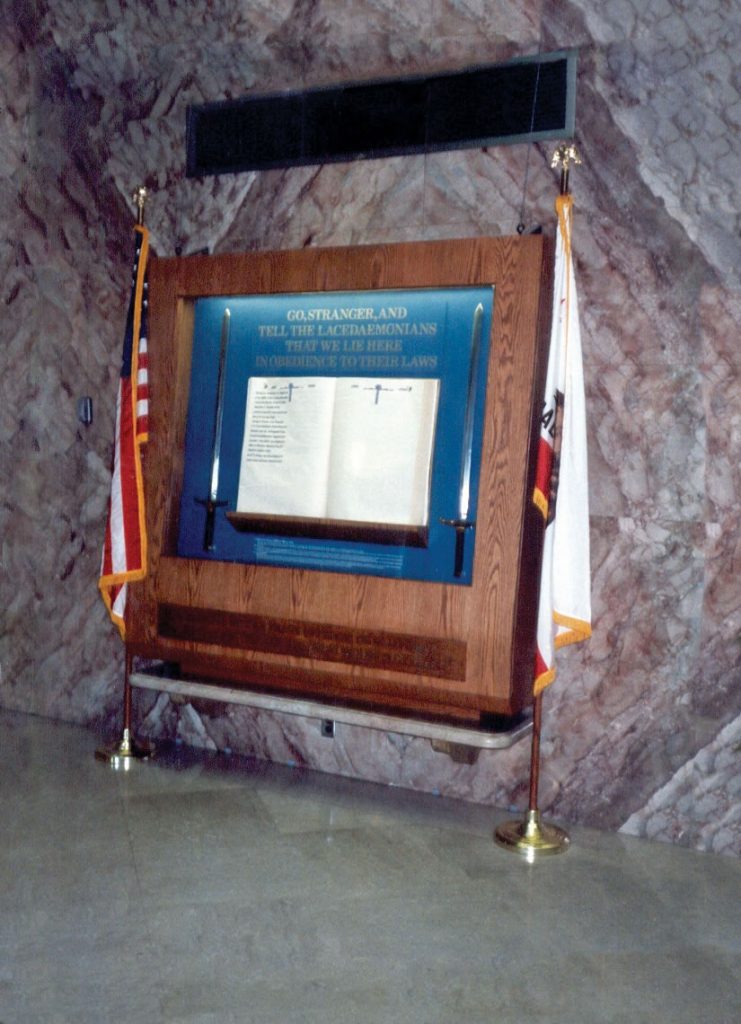 During the construction of the memorial, it became apparent that a committee should be established to handle the continual policy decisions that were necessary. Joe Aceto asked Senator Presley to chair the committee and appointed Gene Muehleisen, past President of PORAC and former Executive Director of POST; Sammy Hoyt, widow of former PORAC President Dave Hoyt, who had been murdered by an escaping prisoner; and the Reverend Frank Nouza, PORAC Chaplain and graduate of the Oakland Police Academy. The committee developed the guidelines for the inclusion of names in the memorial book, as well as the process employed for keeping track of those peace officers who died during the year.

The first memorial was finally built and mounted on a wall at the entrance of the east wing of the Capitol. An article in the PORAC Law Enforcement News described the initial dedication ceremonies:

“On Friday, Oct. 14, 1977, the California Peace Officers’ Memorial was dedicated with dignity and care near the governor’s office and the legislative chambers of the State Capitol.

“The memorial, a huge book bound in leather, contains the handlettered names of more than 1,000 state and local officers who have been killed since 1850 while performing their duties in California. There are pages enough to stretch forward to the twenty-first century. Two glistening swords flank the book and a taped message tells the visitors what it’s all about.

“The memorial was placed, not without purpose, near the legislative chambers, and part of the tape-recorded message states: ‘This memorial was deliberately placed in the pathway of our legislators to remind them that every law they pass must be paid for.’” (Ten years later, the tape recording was removed during restoration.)

Since then, memorial ceremonies have been conducted at the State Capitol each year by PORAC. Initially, they were conducted in the foyer of the east wing of the Capitol, but they were soon moved to a large committee room and eventually the Senate chambers. The surviving family, department administration and association officers for each honoree are invited, along with the governor and other dignitaries. A luncheon for all the families and guests is hosted by PORAC each year. Different associations, such as the California Association of Highway Patrol Officers, have assisted in the ceremonies, since PORAC has always been obedient to the direction of the resolution “That such a monument be a perpetual memorial to all California Peace Officers.”

Watch for Part 2 of this article, covering the history of the current memorial, in the June issue.

In 1987, Rick Baratta reflected on the memorial’s origins and significance in a speech at the annual memorial ceremony:

In the early ’70s we were first developing the idea of the Peace Officers’ Memorial. We had searched assiduously for a concept or a theme that would describe and reflect the importance of what we were attempting: recognition for those of us who had been killed enforcing the people’s law. Finally we recalled an incident in history that occurred over 2,000 years ago.

It was in a valley called Lacedaemon, and the people called themselves Lacedaemonians; Greece knew them as Spartans, the scattered. The Spartans had created a military society and a moral code that exalted bravery: to be good was to be strong and brave, to die in battle was the highest honor, to survive defeat was a disgrace and to surrender was unheard of, just as today cowardice is unheard of among peace officers. “Return with your shield or on it” was the Spartan mother’s farewell to her soldier son. Flight with the heavy shield was impossible.

In 480 BC, Persia invaded the Greek city-states with an army of well over a million. King Leonidas led 300 Spartans and several thousand other Greeks against the invading army. He had taken only fathers so that no family line should die out.

The Greek army halted the Persians at the Pass of Thermopylae and delayed them until nearly surrounded. Leonidas sent the other Greeks away to save them and with the remaining Spartans held the pass, outnumbered 3,000 to one. Ten days after the battle began, the last Spartan fell.

They were entombed there and over the tomb was placed the most famous Greek epitaph: “Go, stranger, and tell the Lacedaemonians that we lie here in obedience to their laws.” This epitaph was also placed on the California Peace Officers’ Memorial as a reminder to the makers of the people’s law that someone has to enforce the law and that task has been given to the peace officer.