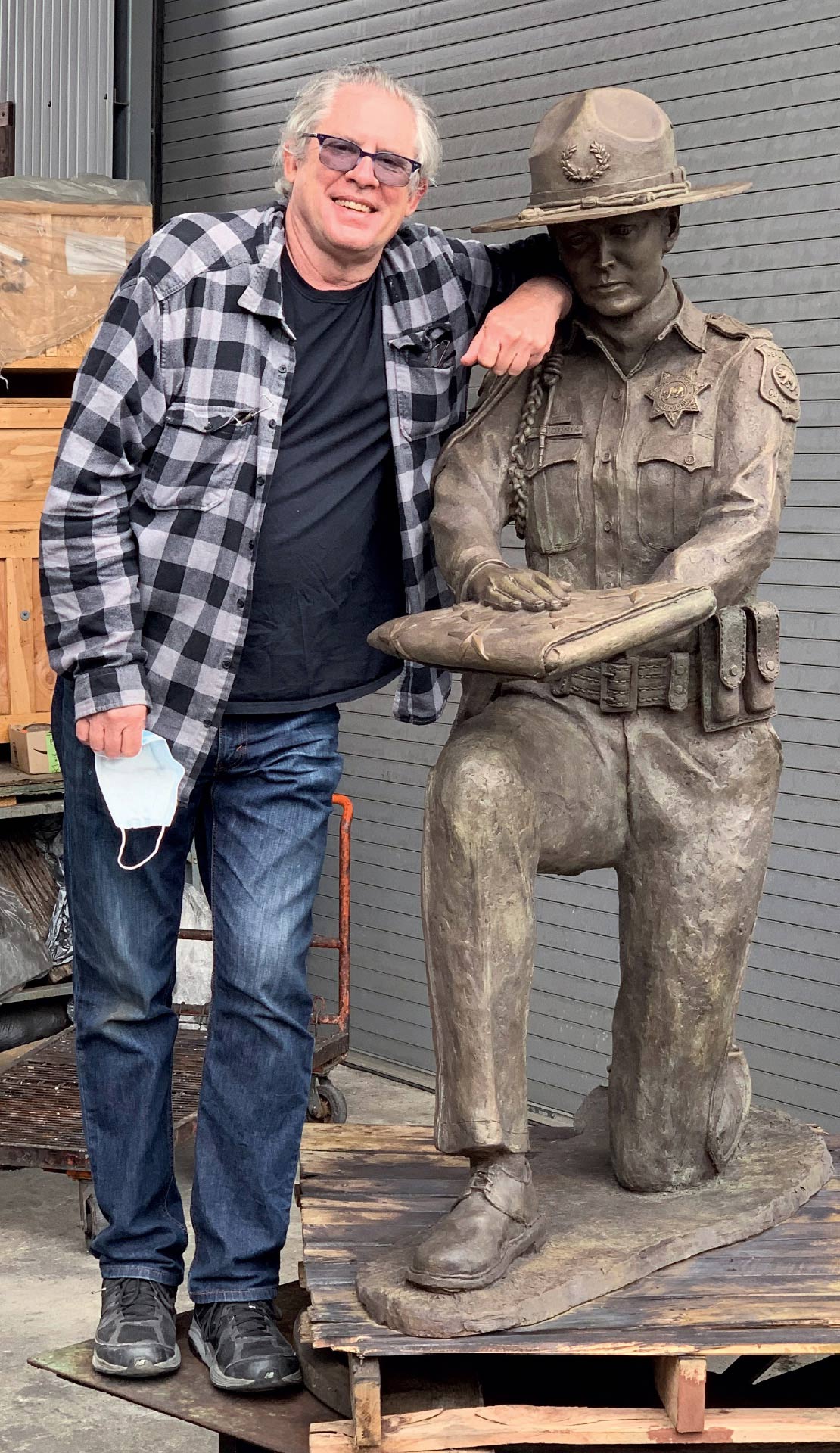 On May 13, 1988, history was made when Governor George Deukmejian dedicated the California Peace Officers’ Memorial Monument at the State Capitol. In a ceremony attended by hundreds of law enforcement members statewide, the governor unveiled a 13-foot bronze statue depicting three male officers from three different eras in time — a county sheriff of the 1880s, a state traffic officer of the 1930s and a city patrolman of the 1980s — in addition to a life-sized bronze sculpture facing the memorial representing the survivors of the fallen in the form of a woman comforting a child, with a folded American flag adjacent to the two figures.

The towering statue centers on the evolution of male figures in law enforcement, due to the profession being historically male-dominated. But at the time of the dedication, seven female officers had already been enrolled on the monument. Since 1989, 16 more female officers have died in the line of duty in California. But a statue that represents them and their sacrifice has been absent from the memorial grounds — until now.

This year’s California Peace Officers’ Memorial ceremonies once again made history with the unveiling of a long-overdue new statue honoring women peace officers. In this article, PORAC takes you behind the scenes of how this statue came to fruition, with insights from California Peace Officers’ Memorial Foundation (CPOMF) President Kevin Mickelson and sculptor Christopher Slatoff.

When the memorial monument was conceptualized and built in the 1980s, law enforcement was a male-dominated field, CPOMF President Kevin Mickelson explains. “Modern-day law enforcement is now far more diverse, and the idea of incorporating a female officer to the memorial monument had been discussed on and off for the last decade or so.” However, in 2019, the line-of-duty deaths of two young female officers, Davis Officer Natalie Corona and Sacramento Officer Tara O’Sullivan, galvanized the CPOMF Board to act. “Those tragic deaths were the catalyst for finally moving the project forward,” Mickelson said. “Women are doing the same job as men in law enforcement. When an officer is killed in the line of duty, I doubt very seriously the suspect cares one way or the other whether they are a man or woman. Women officers face the same dangerous situations as men, and it’s time their service and sacrifice are recognized.”

CPOMF formed an ad hoc committee for the monument and began conducting interviews with sculptors in the summer of 2019. The committee provided candidates with their vision for the statue and then allowed the artists to present their ideas. “During the interview process, we had two female honor guard officers present during the meetings,” Mickelson said. “We felt it was important for the sculptors to see the uniforms and know what level of detail would be expected in the finished product.” After interviewing three artists, the committee was close to choosing one of them, but CPOMF Executive Director Wayne Quint Jr. asked that they consider interviewing a fourth artist, Christopher Slatoff.

When Slatoff met with the committee at the memorial monument, he presented several miniature clay models of potential designs, including one of a kneeling officer, which the committee unanimously chose on the spot. When Mickelson informed Slatoff that the CPOMF Board voted to hire him, he accepted the assignment and asked that San Joaquin County Deputy Sheriff Teresa Morgan, one of the officers present at the meetings, serve as the model for the statue.

Eye of an Artist

Slatoff, a Los Angeles–based public artist specializing in monumental sculpture, first learned of the project from his longtime friend Vic Riesau, a retired LASD division chief-turned-sculptor who was the creator of the original memorial monument. He notes that CPOMF first approached Riesau but, being in his 90s, he couldn’t accept the job, so he referred it to Slatoff. When Slatoff began mocking up designs for the statue, he considered how his design would complement Riesau’s. “My two-decade-long friendship with Vic colors all aspects of my approach to this project,” he says. “Vic’s original design needed to be respected. I have seen the visitors to the memorial be very moved by its emotional impact. I knew that my addition would have to harmonize and, if possible, amplify the message that Vic put forward in the monument.”

In the creative process, Slatoff found himself grappling with the question of how he was going to honor the existing memorial without altering the original design or creating something that blocked people’s view of it. He found a solution in the circular planter at the main entrance to the memorial grounds, which includes the names of the more than 1,600 officers who have made the ultimate sacrifice since California became a state. “This was a place of seasonal flowers, the symbol of rebirth. It is also a place where hundreds of small American flags are laid out on days of special import,” he says. “Having the female officer kneeling in a V-shaped composition appeared to me to be the perfect solution; it directed the viewer’s eye back to the original monument without blocking it. Like a brave soldier in combat, she is walking point.”

CPOMF contracted Slatoff for the project in November 2019 with the goal of unveiling the new addition at the 2020 Memorial Ceremony. It took about a year for Slatoff to finish the bronze sculpture, which stands approximately 7 feet tall. “Once I started on it, we really went at it pretty hard. I spent 10 hours a day thinking about these brave women as my hands worked the clay,” he says, noting that CPOMF was very involved in providing input throughout the entire process, and that he even struck up a good friendship with Mickelson, who “had his back” every step of the way.

“I was creating a sculpture for people who were trained to analyze every tiny detail. I was trying to please people whose very lives depend on being observant,” he says. “They made sure that it was done right. Artistically, the challenge of the entire project boiled down to the same dilemma that any cop on the beat has: How does one reconcile the formal officer on duty with the individual humanity of the woman with that job?”

Deputy Teresa Morgan helped him find the answer. Slatoff says he got to know her “as a real human being” behind the badge. She shared not only her experiences on the job as a female officer, but also about being a mother, as she brought her daughter with her to the studio. Slatoff channeled Morgan’s essence into the sculpture with the help of his collaborator, Elisabeth Pollnow, who added a lot of the tight detailing to the work and helped get the posing of the female figure exactly right. Slatoff hopes that what comes through in the sculpture is “enough humanity, but at the same time, enough of the role of the police officer in contemporary society.”

“As a society, we are what we decide to memorialize,” Slatoff says. “Rather than just fashioning decorative fluff for a city, true civic art rewards those traits that built a great civilization. We want public art that honors the greatest values of humanity.”

To that end, he says his statue honors duty, integrity and self-sacrifice.

“The essence of the pose is both the presentation of our flag to the family, as well as the dutiful acceptance of our officer to her fate,” he explains. “My goal was that everyone who stands in front of our memorial will be presented with this folded flag. The observer should be transformed into a family member who has lost a beloved peace officer. The message is that as a citizen you have lost a loved one when an officer is down. Everyone needs to feel the loss, not just the family. Everyone needs to feel the pain and be grateful for the service. I am not the one who will decide if I fulfilled my goals, but, like every officer, these are the ideals that I strived for.”

Slatoff also recognizes that the sculpture is being introduced in a divisive and contentious moment in our nation’s history with regard to law enforcement, and so along with its purpose of memorializing the fallen, he believes the work also has the ability to change people’s perceptions about the profession. “This is a magical time to be doing this work because people will actually look at it. Even if they look at it and get mad, they’re paying attention,”
he says. He hopes that people, no matter how they feel about police, ultimately see the humanity behind the work.

In addition to creating a dialogue, an equally important message he wants the statue to convey to peace officers is: “Yes, you are appreciated.”