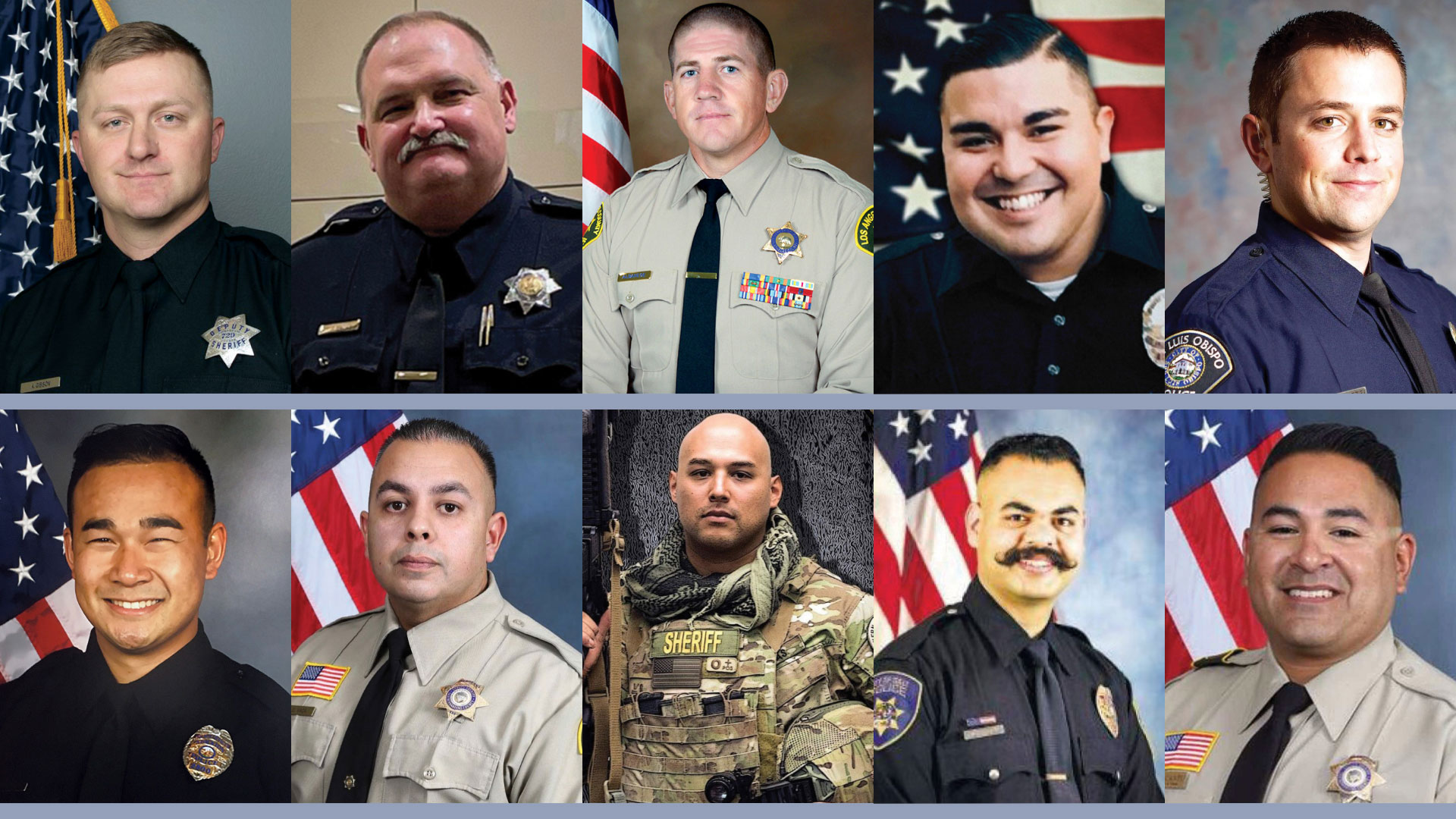 May is a sacred month for our nation’s law enforcement profession. It is a time for peace officers, survivors and supporters to come together to pay tribute to the men and women we have lost in the line of duty. And after two years of canceled and virtual memorial ceremonies, PORAC and law enforcement across the country are pleased to be able to once again pay our respects to the fallen in person.

The 2022 California Peace Officers’ Memorial Ceremony at the State Capitol will publicly recognize 28 officers from the past several years, including the 10 officers featured here who perished in 2021. Those officers will also be recognized during National Police Week ceremonies in Washington, D.C. These observances will honor the 619 officers — 472 who were killed last year, plus 147 who died in previous years — whose names will be added to the National Law Enforcement Officers Memorial.

PORAC believes it’s important that we take the time to honor the service and sacrifice of our fallen heroes, and to pay respects to the families they left behind. We dedicate this issue of the magazine to the California officers we lost this past year and their survivors. 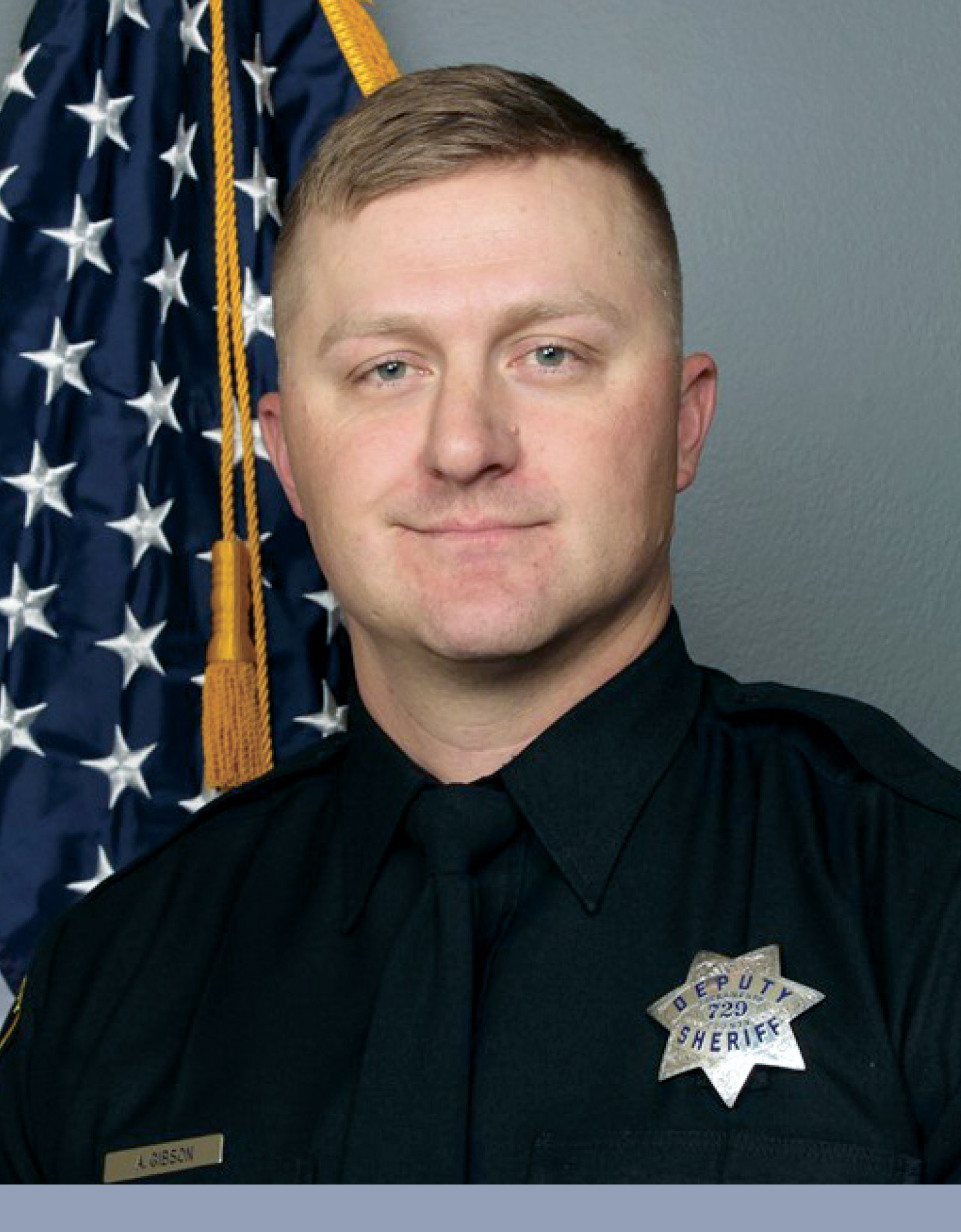 Deputy Adam Gibson, a six-year veteran of the Sacramento County Sheriff’s Office, was killed following a late-night pursuit that ended in a shootout with the chase suspect at the Cal Expo grounds in Sacramento. K-9 Riley, a three-year veteran, was also fatally wounded during the incident.

Gibson, 31, joined the department in 2014 and worked in corrections and patrol, and most recently as a K-9 handler for the Central Patrol Division. In 2018, Gibson received the Sheriff’s Office Bronze Star for Bravery and a major incident ribbon. Prior to his law enforcement career, Gibson served in the Marine Corps, completing two tours in Afghanistan. He was highly decorated for his service to his country.

“This morning I share in your grief for Deputy Adam,” Sacramento County Sheriff Scott Jones said during Gibson’s memorial ceremony. “The best way to honor our fallen is by being together. And here you are. So, I thank you for that. I am here with you. I am grieving with you. Hurting with you. Crying with you. We seem to be here far too often.”

Gibson is survived by his wife and daughter. 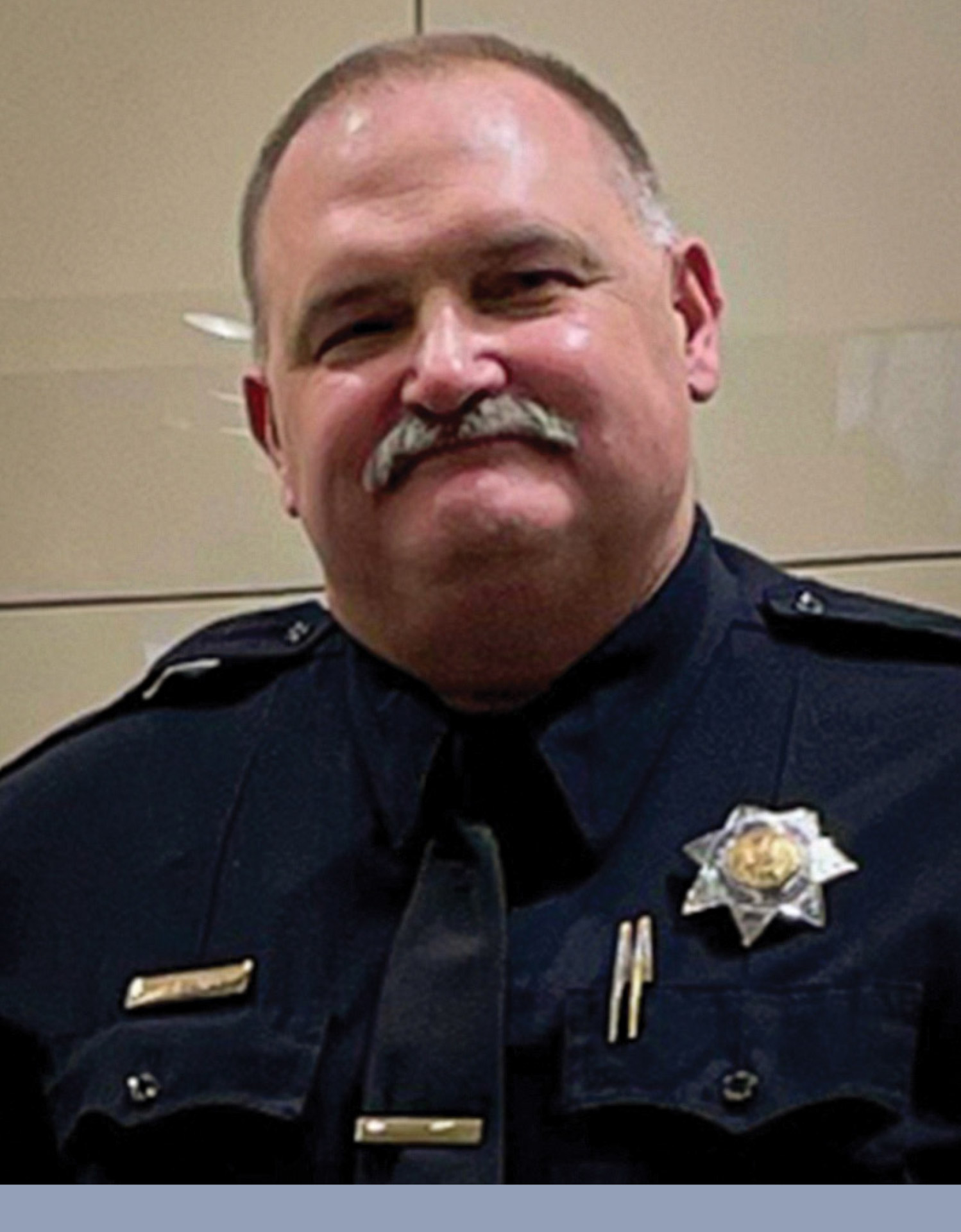 Brown, 56, began his long career with the department in 1993. He worked many different assignments, including the Training Unit, SWAT and Mounted Patrol. At the time of his death, he was assigned to patrol in the Central District. Brown held the rank of sergeant for 19 years.

“Paul’s death hits near to my heart. I’ve known him for decades and have fond memories of playing softball with him on the police department’s fast pitch team,” Fresno mayor and former police chief Jerry Dyer said in a statement. “Paul was a dedicated sergeant and a very good officer. He will be sorely missed not only by fellow officers, but by the community as a whole.”

Brown is survived by his wife and three children. 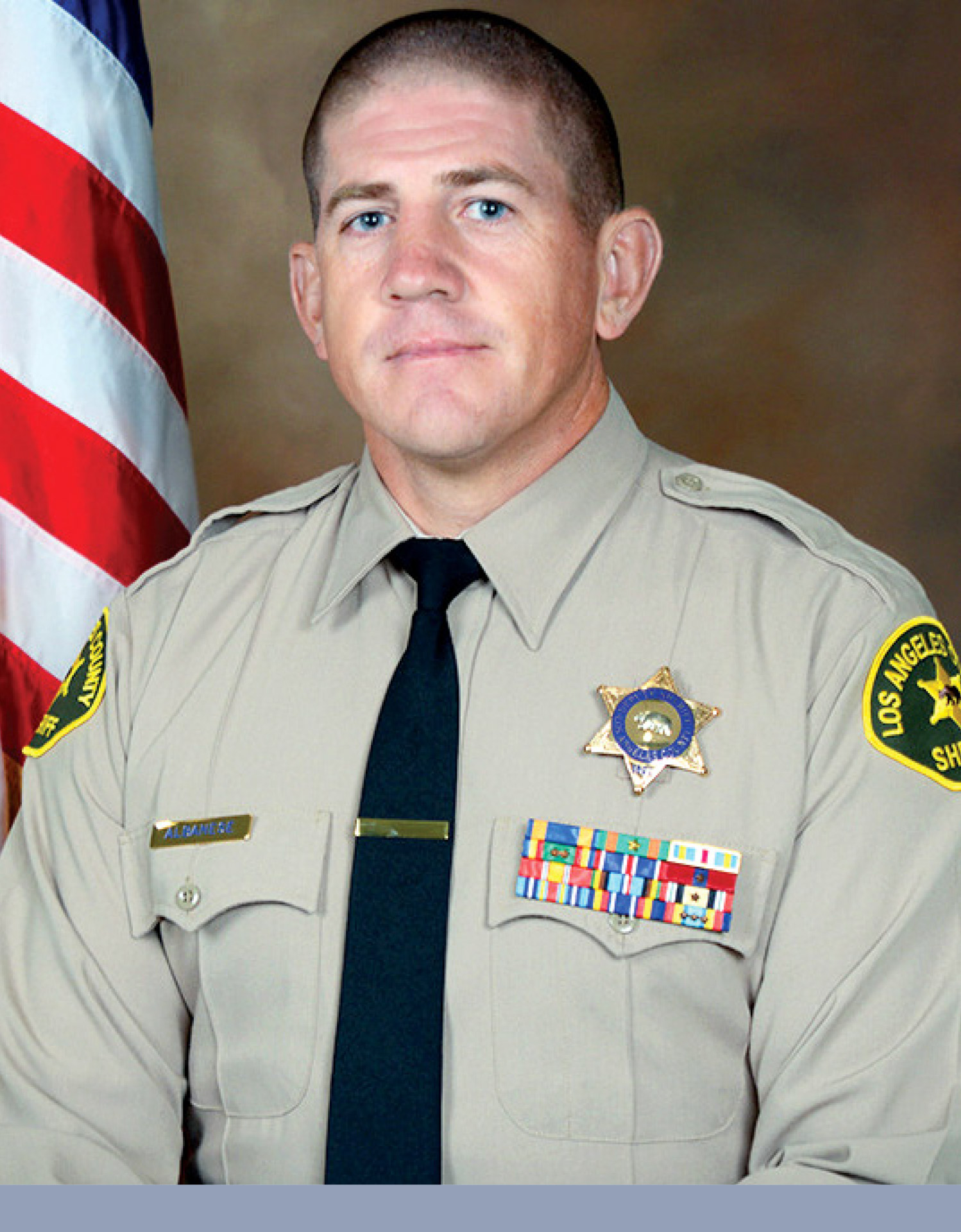 Deputy Thomas J. Albanese, a seven-year veteran of the Los Angeles County Sheriff’s Department, was killed in a traffic collision while on motorcycle patrol in Lakewood. He was attempting to conduct a traffic stop and was struck by a vehicle when he entered an intersection.

Albanese, 41, joined the sheriff’s department as a security assistant in 2013. In 2015, he began serving as a deputy and was assigned to Men’s Central Jail. He then went to patrol at Transit Services Bureau and then transferred to Lakewood Station as a field training officer. His last assignment was as a Pico Rivera Station motor deputy (he had been working overtime at Lakewood Station at the time of his death). Albanese was also a highly decorated Marine Corps veteran who served four tours in Iraq.

“Thomas touched the lives of many people while working in the Department,” Sheriff Alex Villanueva said in a statement. “He received several commendations for his work in patrol and helping the citizens of Los Angeles County.”

Albanese is survived by his wife and two children. 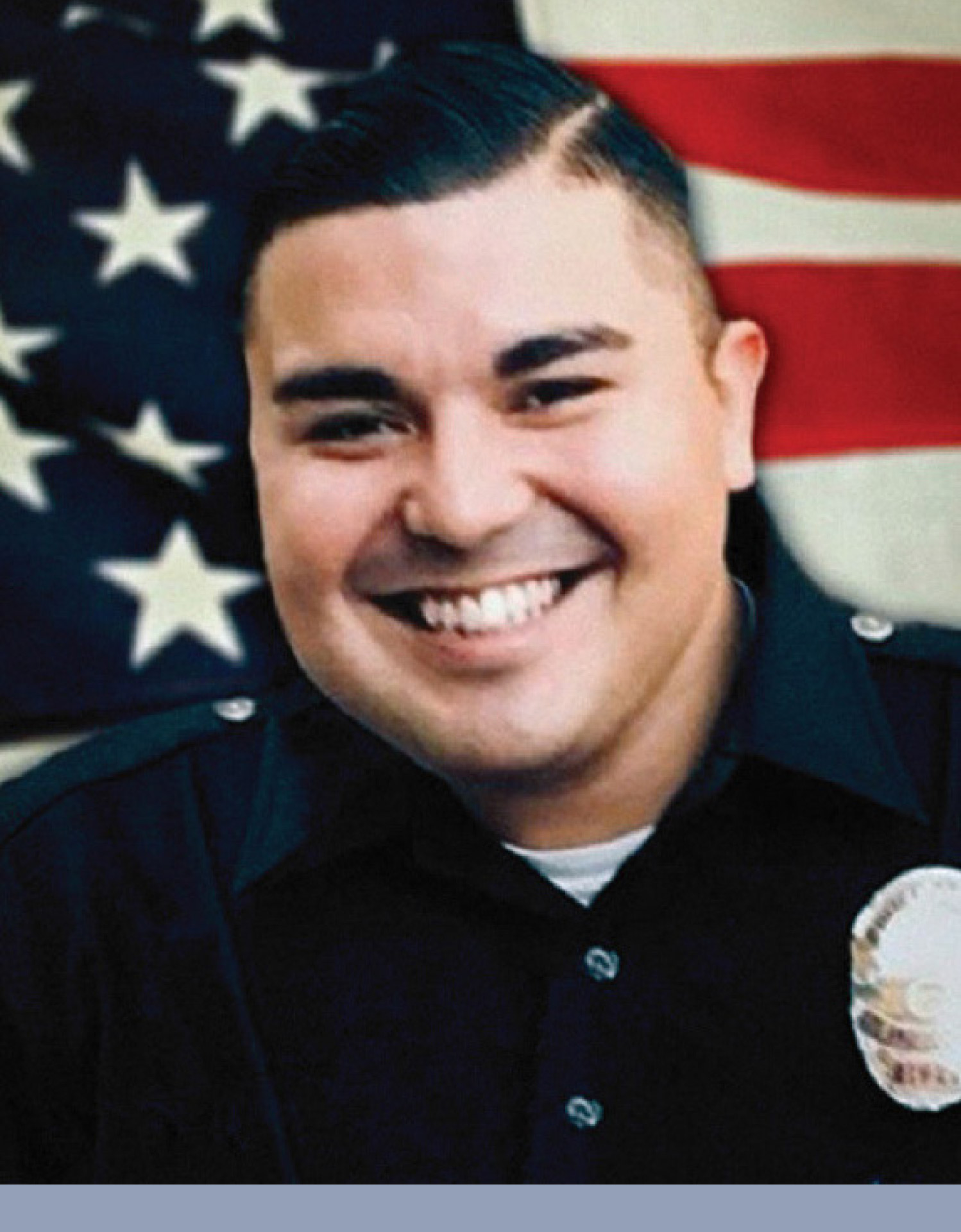 Officer Jose Anzora, a 10-year veteran of the LAPD, succumbed to injuries suffered on February 26, when he was struck by a vehicle while doing traffic control in South Los Angeles.

Anzora, 31, joined the department in 2011 and spent the majority of his career in the Newton Area. On a fundraising page for Anzora, his family said that the officer was having a tough year after losing his father to COVID-19 in 2020. They also shared that Anzora had “a great and happy personality, always can light up the room with his smile, and will constantly talk about his fishing trips and catching the ‘big one,’ and of course he enjoys showing off his pool shark skills.”

“Today we lost a guardian and protector,” Chief Michel Moore said in a statement. “LAPD Officer Jose Anzora served for nearly a decade. He tragically lost his life in the selfless service in the communities in South L.A.”

Anzora is survived by his wife and family. 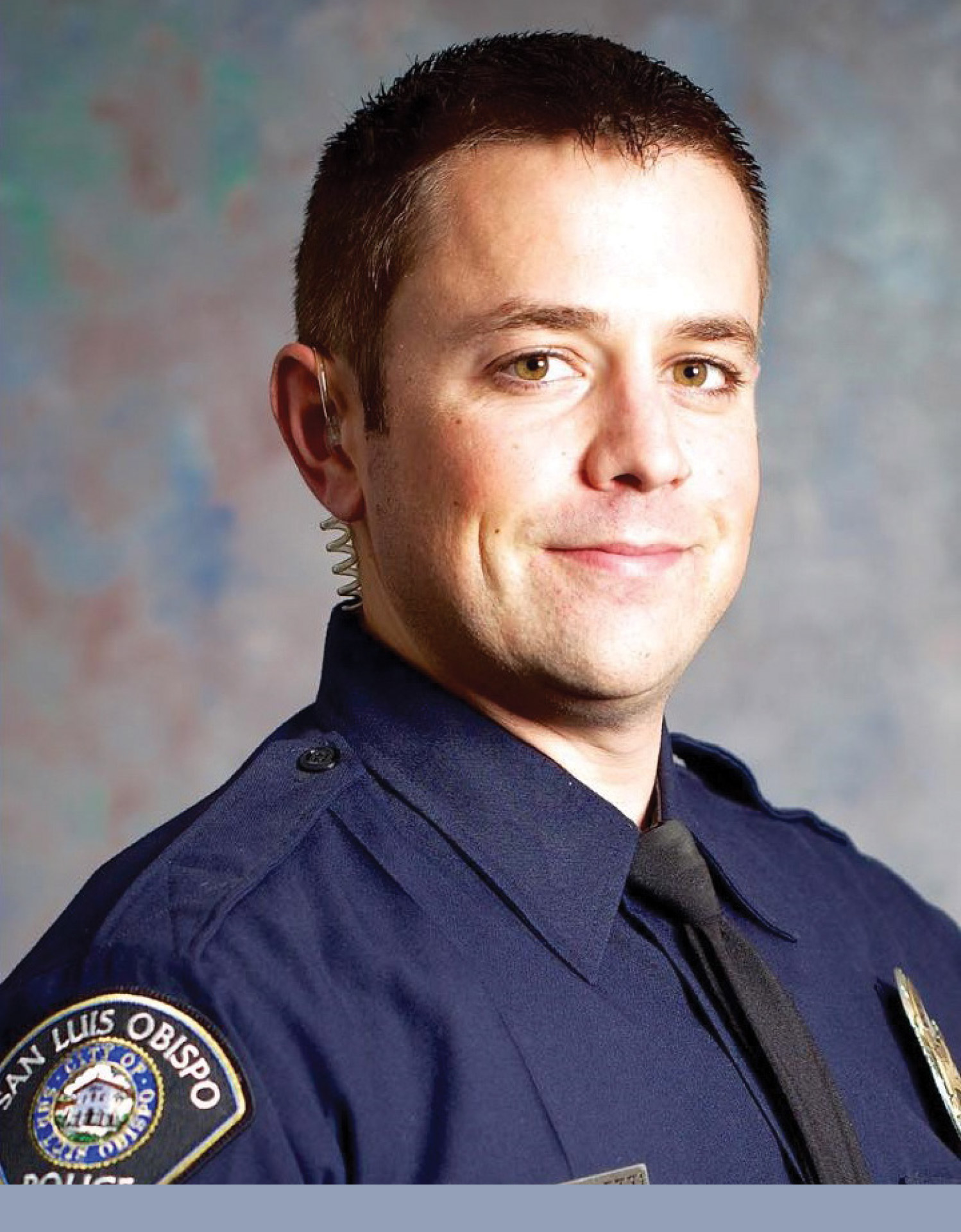 Detective Luca Benedetti, a 12-year veteran of the San Luis Obispo Police Department, was shot and killed while he and other detectives were serving a search warrant for stolen property connected to a series of burglaries at an apartment in the city.

Benedetti, 37, joined the department in 2012 after serving four years with the Atascadero Police Department. He was a member of the San Luis Obispo Regional SWAT team and served in additional special assignments, including traffic accident reconstruction, information technology and field training officer. He was a 2017 Mothers Against Drunk Driving (MADD) award recipient for his efforts with DUI enforcement.

“Luca’s many talents have had an impact on those around him,” San Luis Obispo Police Sergeant Caleb Kemp said during Benedetti’s memorial service. “He was the best and he proved it over and over again. There was a calmness, a smoothness, a soundness to everything he did.”

Benedetti is survived by his wife and two children. 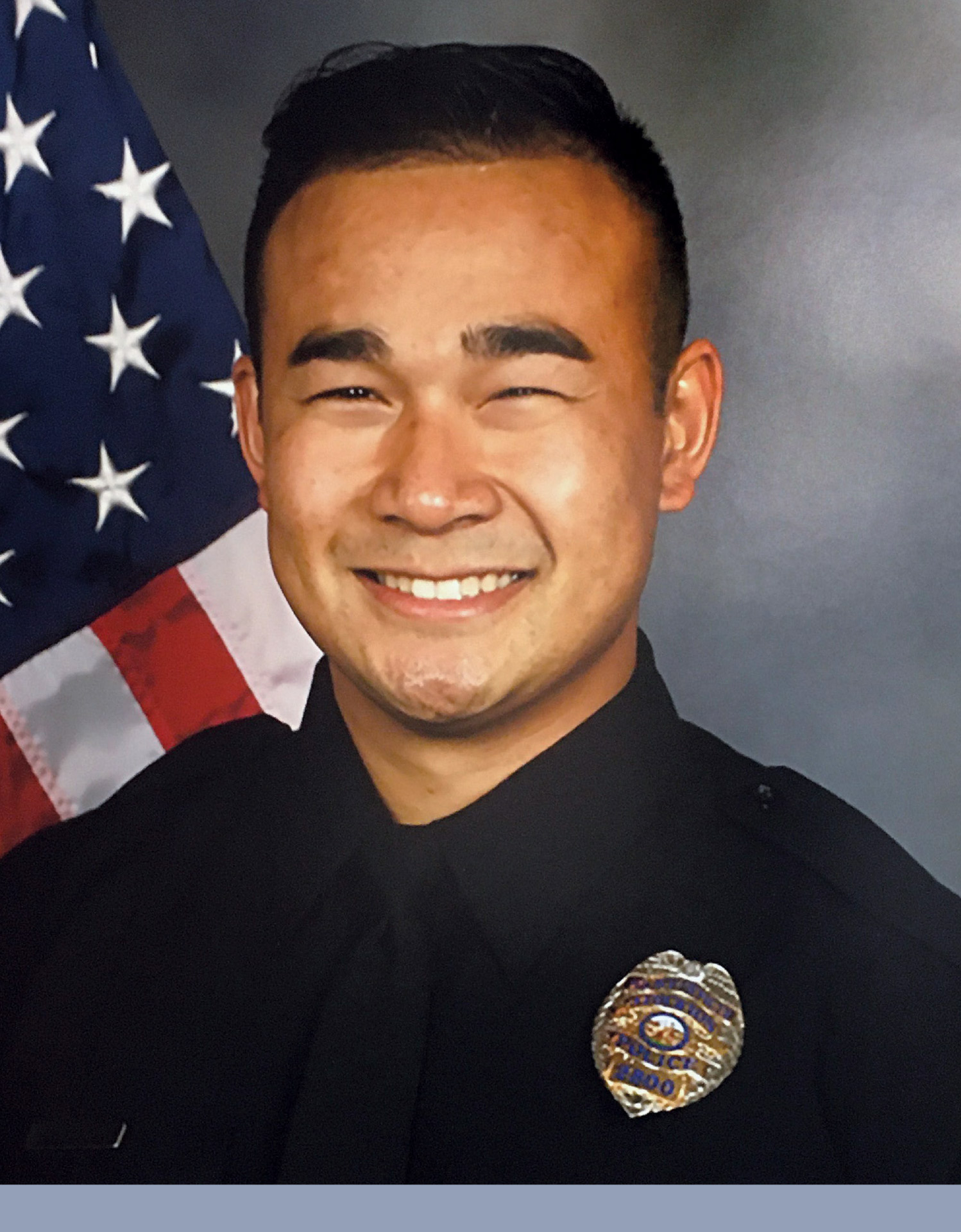 Officer Jimmy Inn, a six-year veteran of the Stockton Police Department, was shot and killed almost immediately after arriving to a Stockton home where a domestic disturbance had been reported.

Inn, 30, joined the department in 2015 and was assigned to the Field Operations Division. He was also a member of the Stockton P.D. Honor Guard.

“Officer Jimmy Inn was responding to a domestic violence report to assist a domestic violence victim and he died protecting those who cannot protect themselves,” Stockton Chief Eric Jones said. “He gave the ultimate sacrifice, knowing this was a dangerous job.”

“He was the best man you will ever meet. The best person … I mean he changed my life,” his wife, Tela Inn, who is also a Stockton police officer, told reporters. “I don’t know what I’m going to do without him. He was the positive force in my life, he kept me going when I wanted to give up.”

Inn is survived by his wife and three children. 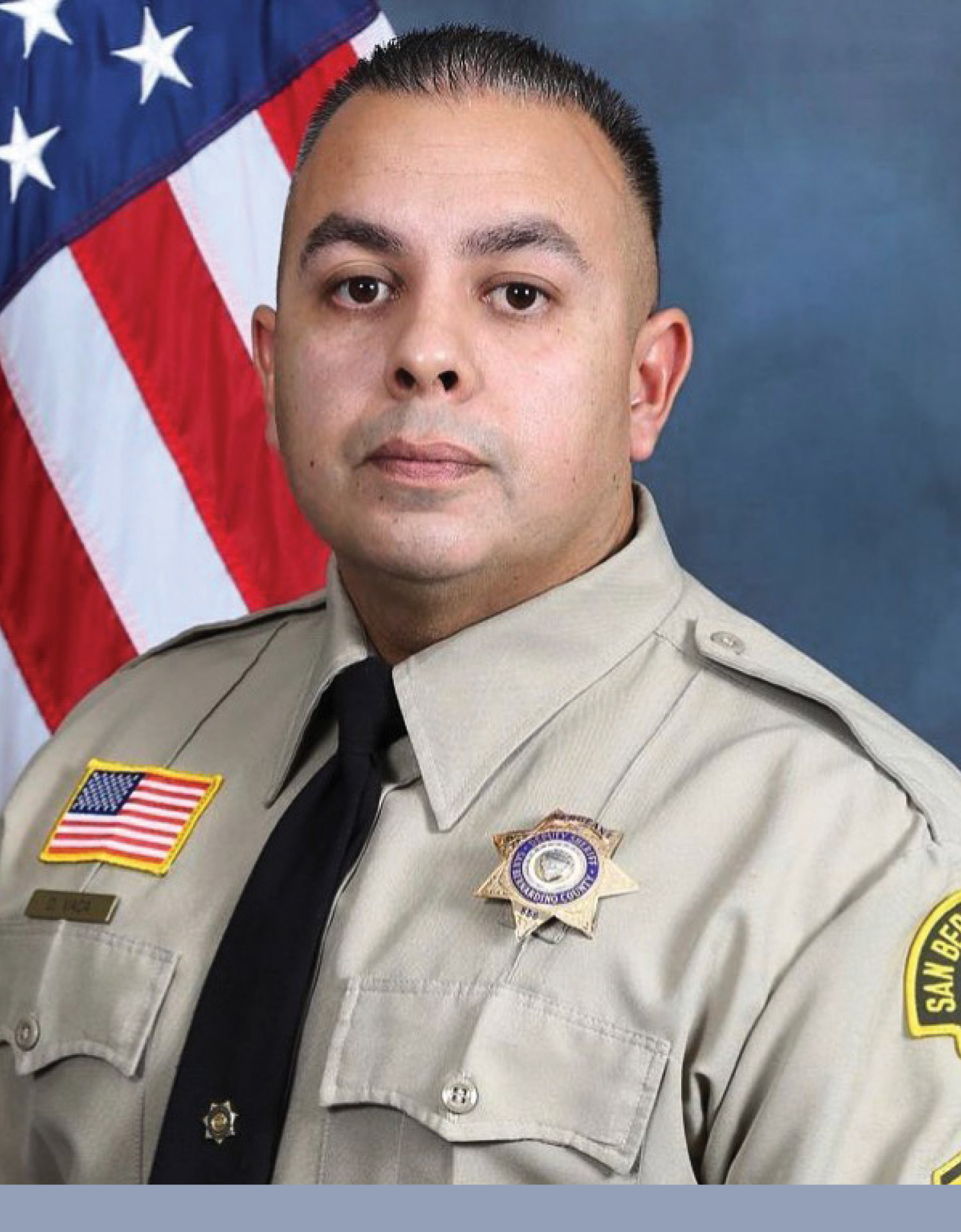 Sergeant Dominic Vaca, a 17-year veteran with the San Bernardino County Sheriff’s Department, was fatally shot on Memorial Day after a high-speed pursuit with a motorcyclist in Yucca Valley.

Vaca, 43, joined the department in 2004 and was assigned to the Morongo Basin Station, the third-largest sheriff’s station in San Bernardino County. Prior to joining the force, Vaca served six years in the Army, where he received numerous commendations.

“He did everything he could to build up everyone around him,” Captain Luke Niles said at Vaca’s memorial service. “Dom was always successful at what he did. He met every challenge head-on, led from the front and earned the trust of everyone who ever worked around or worked with him.”

Vaca is survived by his wife and two children. 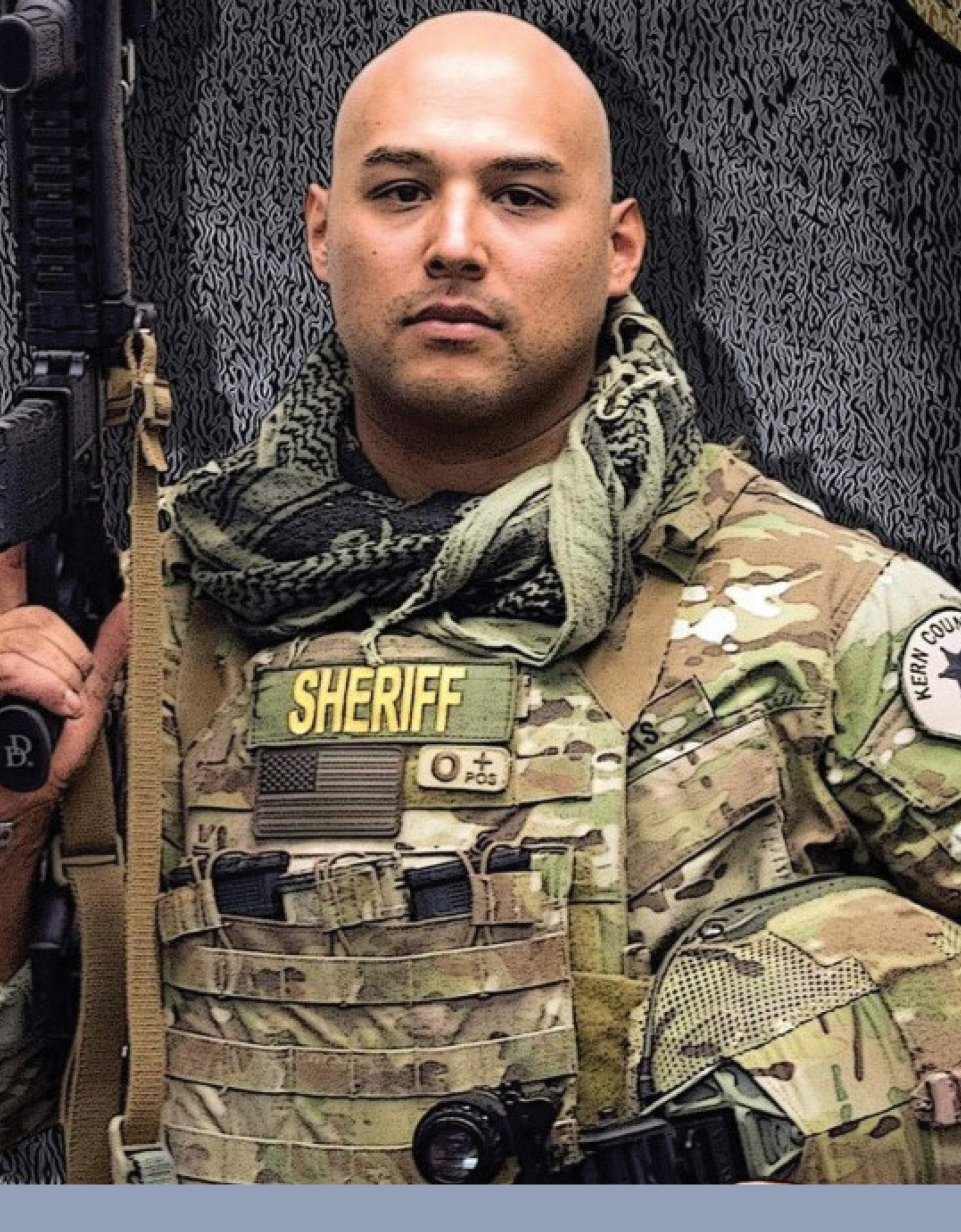 Deputy Phillip Campas, a five-year veteran of the Kern County Sheriff’s Office, was fatally shot during an hours-long SWAT standoff at a home in Wasco, located outside of Bakersfield, where a man with firearms had barricaded himself with three hostages. Campas, the suspect and the hostages were all killed in the incident.

Campas, 35, joined the sheriff’s office in 2016, was a member of the SWAT team and honor guard, and served as a patrol deputy and training officer. Before becoming a sheriff’s deputy, he served in the Marine Corps, where he deployed to Afghanistan and then became a drill instructor at Parris Island.

“He was a star,” Kern County Sheriff Donny Youngblood said during a news conference. “Deputy Campas touched everyone in our organization. When you talk [about] a police officer who runs toward gunfire, that’s him.”

Campas is survived by his wife and three children. 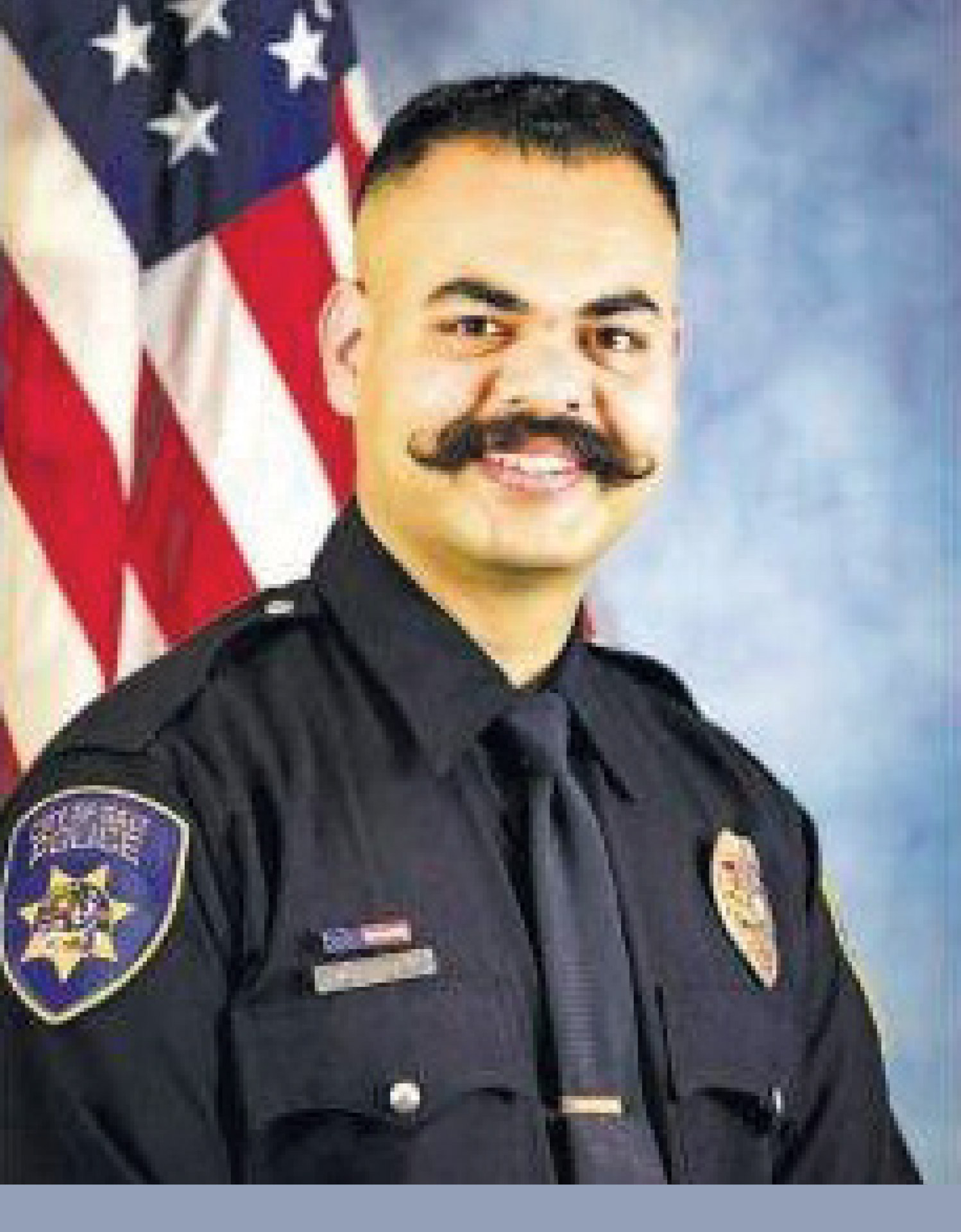 Officer Harminder Grewal, a nearly three-year veteran of the Galt Police Department, died due to injuries suffered during a head-on collision that occurred while he and his partner were en route to assist with the Caldor Fire in El Dorado County on August 22.

Grewal, 27, began his law enforcement career with the Modesto Police Department in 2018 and then served with the Lodi Police Department. He was sworn into the Galt P.D. in 2019, where he started in the patrol division and was a member of the honor guard. In 2020, the department named Grewal Officer of the Year. He was also honored by MADD for his efforts with DUI enforcement.

“He made the ultimate sacrifice while performing his duties as a public servant, responding to danger,” the department wrote in a statement. “Officer Grewal took pride in serving his community, and his work ethic was contagious to all who worked with him. His service to our community will never be forgotten.”

Grewal is survived by his parents, brother, sister-in-law and sister. 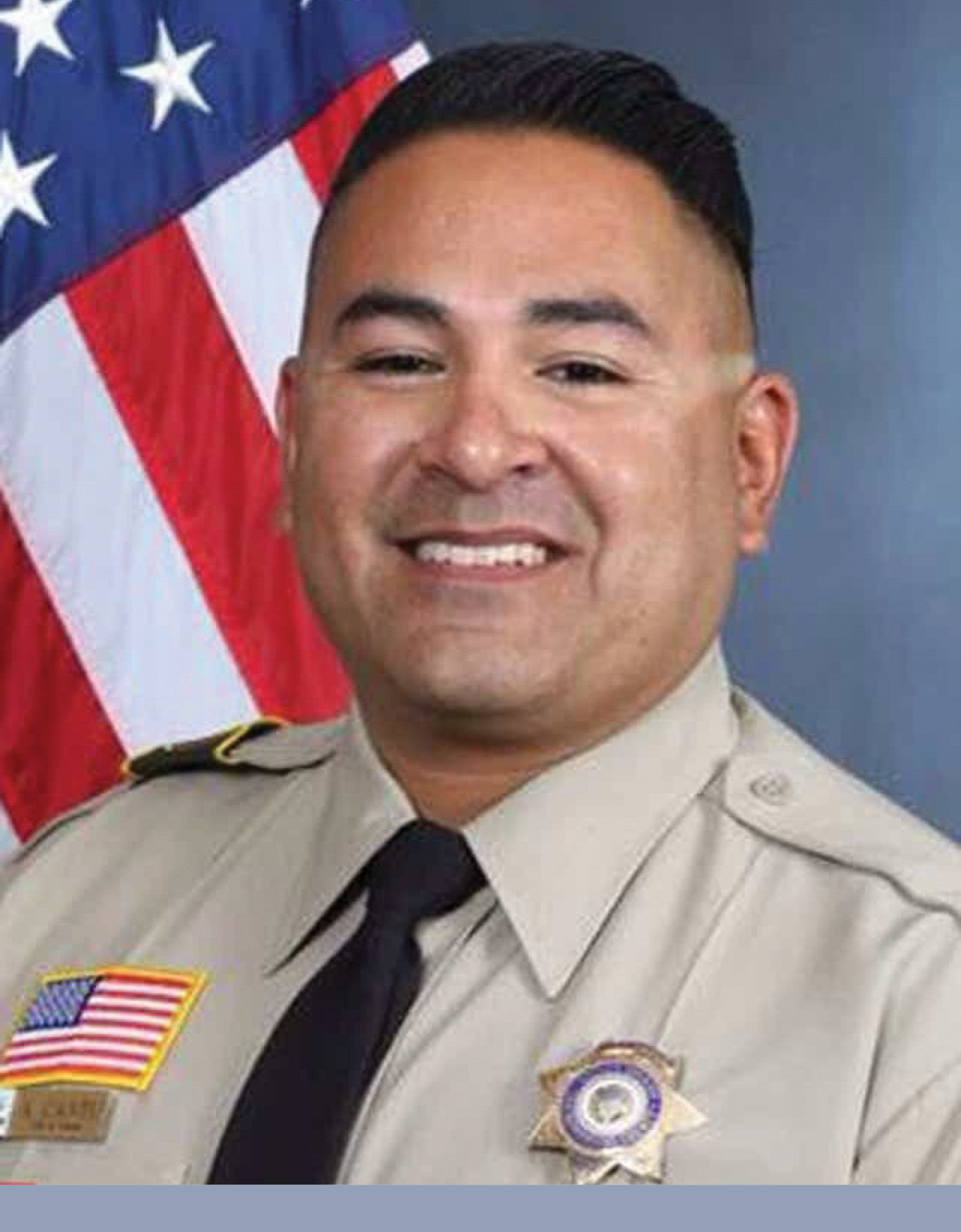 “Detective Cantu is survived by his loving family and many friends at the Sheriff’s Department,” sheriff’s officials posted on social media. “Please keep Detective Armando Cantu and his family in your thoughts and prayers.”

Cantu is survived by his wife and son.