To help you learn more about where and who your fellow members are, PORAC Law Enforcement News will regularly profile one of the 14 chapters up and down the state. We hope that reading about each chapter’s challenges and achievements will bring us all closer together and inspire you, your association and your own chapter as you navigate the road ahead.

This month, we feature the South San Joaquin Chapter. 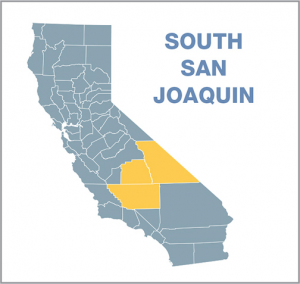 The South San Joaquin Chapter represents law enforcement associations in some of the state’s most rural landscapes. With abundant access to rivers, mountains and forests, the people of Inyo, Kern and Tulare counties enjoy the comforts of city life and the adventure of the great outdoors.

But the area’s geography has presented the chapter with two enduring challenges: bringing together a membership of smaller law enforcement associations spread across great distances and overcoming physical barriers posed by the mountain ranges that separate the chapter from the greater PORAC membership.

Not long ago, the chapter was semi-dormant, with minimal structure and lack of member participation. For a time, it was even viewed as an extension of the Central California Chapter. The geographic inhibitors didn’t help. But under the leadership of Chapter President and PORAC Director Ryan Maxwell, the chapter has overcome issues of distance and rebuilt itself.

After becoming a PORAC director in 2014, Maxwell took the reins of the chapter along with Tim Caughron and Bryan Tenhet, the chapter’s two other directors-at-large. In 2017, Maxwell became president and began shaping the chapter into what it’s become today.

Maxwell says he worked very closely with Tenhet, who serves as the chapter’s vice president, to get the chapter back on its feet. “He was very instrumental in getting the chapter up and running,” Maxwell says. “He has a great devotion to law enforcement.”

Thanks to their teamwork, in recent years, the chapter has successfully re-established connections with and among its membership by holding regularly scheduled meetings and becoming more active in PORAC. As a result, member participation has grown significantly, which Maxwell says is reflected in the chapter’s accomplishments.

In 2017 and 2018, the chapter proudly presented POREF scholarships to two deserving students in the region. “A search of winners from previous years revealed that there had not been a winner from our chapter” in nearly a decade, Maxwell says. “These were proud moments for us, and it shows membership participation.”

The POREF scholarship and other PORAC benefits, such as the Legal Defense Fund and Insurance Benefits and Trust, are just a few examples of the key important information discussed during chapter meetings, which Maxwell believes are the foundation to getting members engaged.

“Members should be involved because, first and foremost, this is their association!” he says. “Being involved and attending meetings allows members to get up-to-date information regarding issues that PORAC is working on for its members. It also allows them to see these things firsthand and see the importance of the association and how their dues money is working for them.”

For Maxwell, more engagement gives the chapter “a voice” and its members the opportunity to better connect with local law enforcement within the region and beyond. “The ability to work with outside law enforcement agencies has made it possible to learn from others as well as assist other agencies with issues as they arise,” he says.

Maxwell, who has been a PORAC member since 2011, says that he was elected to his leadership positions because of his interests in promoting the welfare of both the association and peace officers in general. “I am not afraid to speak my mind nor am I afraid to dig my heels in when I need to get the job done,” he says.

Asked what other PORAC members might be surprised to learn about the chapter, Maxwell says: “Southern hospitality isn’t just reserved for the southern states — it’s alive and well in the South San Joaquin Chapter. 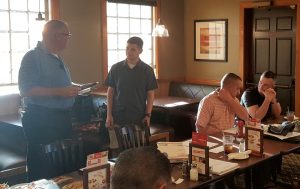 “The atmosphere of our chapter is relaxed. If you show up [to a meeting] wearing a tie, we might cut it off of you, so wear a tie you don’t like,” he says. “Boots, jeans and a nice polo is the perfect attire, but just remember to knock the dirt off your boots at the door.

“Our chapter meeting doors are always open, and we extend an open invitation to any PORAC member who wants to attend our meetings,” he adds. “Just let us know you are coming and we will set you a place at the table.”