To help you learn more about where and who your fellow members are, in PORAC Law Enforcement News we’ll profile each of the 14 chapters up and down the state. We hope that reading about every chapter’s challenges and achievements will bring us all closer together and inspire you, your association and your own chapter as you navigate the road ahead. This month, we feature the Los Angeles
South Chapter. 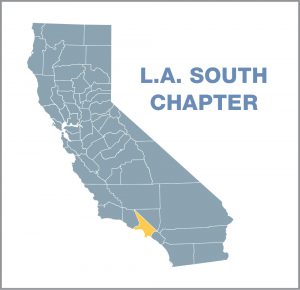 Political advocacy ranks high on the current agenda of the Los Angeles South Chapter, whose leadership prides itself on keeping members apprised of issues and news related to law enforcement and labor, candidate endorsements and more.

Most notably, the chapter has been galvanizing support for SB 230, the law enforcement–backed legislation that has been amended recently to focus solely on use-of-force training and policy guidelines. Chapter President Brandon Browning says he and other chapter leaders have been contacting legislators to help push the measure forward, and they’ve also been encouraging their 3,230 sworn and non-sworn members from 53 associations throughout southern Los Angeles County to do the same.

“Our role is to educate our member associations regarding the importance of PORAC and how providing support to political candidates and supporting, opposing or sponsoring legislation affects our families and careers,” says Browning, a 22-year PORAC member who also serves as the vice president of the El Segundo Police Officers’ Association.

This level of engagement from members helps ensure that the chapter and PORAC’s positions on state and local issues are recognized by elected officials and that leaders supportive of law enforcement get a seat at the table to advocate on behalf of peace officers.

Browning says the chapter is particularly happy with the success rates of its endorsed candidates. Many of the judicial, Senate and Assembly candidates that the chapter has supported over the last few years won their respective elections and have since established a strong working relationship with the chapter. The chapter is currently vetting several candidate endorsements for the 2019 and 2020 congressional, judicial, district attorney and various other races.

These victories are in part the result of the chapter’s unique relationship with the Los Angeles Police Protective League (LAPPL) and the Association for Los Angeles Deputy Sheriffs (ALADS). Support from these two large and influential associations is vital when it comes to endorsing law enforcement–minded candidates and bringing public safety issues to public attention since the chapter represents many small associations that have 100 or fewer members. “It’s important that we work cooperatively with ALADS and LAPPL” to make members’ voices heard, Browning says.

In order to stay informed and engaged, chapter Vice President and 25-year PORAC member Cheryl Morris says members need to attend chapter meetings and activities. These meetings provide members with updated information on laws and proposed legislation that affect peace officers, as well as the latest news on training, events and other PORAC-related business. She stresses the importance of these bimonthly gatherings because meeting attendance has been a struggle for the chapter. Most member association leaders are not being afforded release time and general members are “extremely busy policing our communities and fighting crime, so it’s often a struggle to find the time needed to focus on labor and political issues,” says Morris, a former Los Angeles Port Police Association secretary.

Despite this, chapter leaders do their best to accommodate members by rearranging meeting dates and times and by updating members virtually. They make every effort to reach out to their members to establish connections and share the importance of being involved in PORAC. However, Morris believes meeting in person is the best way to do this.

“Attending meetings encourages active listening and meaningful discussion, whereas emailing the information too often falls upon deaf ears,” she says. “Meetings also allow us to bring members together so that we can learn from each other, see what other associations are experiencing and offer support and advice.”

Bringing members together, Browning and Morris agree, is their favorite thing about being involved with PORAC.

“PORAC membership creates an environment in which peace officers interact and work toward achieving common goals and objectives,” they say. “Not only do we keep members informed regarding current issues and endorsements, but we offer financial support by way of PAC/PIC contributions, sponsorships and donations to the families of fallen, injured or critically ill members. We continue to reach out to our members and are constantly striving to build a strong, effective and powerful branch of PORAC.”