Across California and the nation, a movement is underway to equip law enforcement officers with lifesaving automated external defibrillator (AED) devices that restart hearts that have stopped beating.

Take Robert Hoadley as a success story in this effort. In April 2011, the then 41-year-old Hoadley collapsed in sudden cardiac arrest (SCA) at a San Diego hotel where he worked as a project manager. A San Diego police officer responded first on-scene and performed CPR prior to the arrival of EMS. An AED was not available at the hotel, however, and SDPD had not yet placed any of the devices on their patrol units. Thankfully, after being defibrillated by paramedics and hospital staff, Hoadley survived the incident, but his case is the exception, not the rule. Only about one in 10 people survive an out-of-hospital cardiac arrest, and success stories are few and far between.

That’s changing, however, with the push to place AEDs on law enforcement vehicles.

“[The officer] had enough guns and ammo in his trunk to hold his own in Fallujah for a couple of days,” says Hoadley, a Navy veteran who now works as a representative for AED manufacturer Cardiac Science. “He had all of those things to take a life, but he had nothing to save mine.” Hoadley now works closely with San Diego Fire–Rescue’s AED program, San Diego Project Heart Beat (SDPHB), to bring AEDs to law enforcement agencies throughout San Diego County. Jurisdictions in San Diego that have active law enforcement AED programs have among the highest SCA survival rates in the region, some even seeing survival rates in the 80% range.

Research shows that law enforcement officers are a critical link in the chain of survival for SCA patients because they often arrive on-scene prior to EMS, sometimes by several minutes. It’s those first few critical minutes that mean the difference between life and death as the brain and body become starved of oxygen. If patients can be defibrillated within the first few minutes of their collapse, they have a much greater chance of being successfully resuscitated.

The San Diego Project Heart Beat Program oversees AEDs for police, sheriffs, harbor police, courts, juvenile detention facilities and border patrol, as well as on helicopters and harbor patrol boats. About one in three AED deployments that occur in the program are by law enforcement officers, a significant contribution.

“It’s a no-brainer for officers to have AEDs,” says Maureen O’Connor, San Diego Fire–Rescue Department AED program manager. “From my years in the field working on some of the busiest paramedic ambulances, when dispatched to cardiac arrest, most times law enforcement arrived before we did.”

O’Connor and her team work to help law enforcement agencies overcome hurdles such as lack of funding and training, and they provide oversight to successfully launch AED programs. AEDs are starting to become a standard of care in many agencies across the country. And while officers are by no means expected to be paramedics, it gives them one more tool to help the public.

AEDs are not only a protection for the public, but they can save officers themselves. Having AEDs in vehicles and at headquarters, storefronts, with SWAT teams and facilities such as training and shooting ranges can be critical if an officer goes down.

Though California doesn’t mandate AEDs for many public places, there is legislation that is advancing the mission of the ultimate goal of making these devices as ubiquitous as fire extinguishers. Recently adopted Senate Bill 287, the Sudden Cardiac Arrest Safety Act, will require AEDs in new commercial building construction that meets certain occupancy parameters, and California Health and Safety Code 1797.196 provides protection and indemnification for organizations that have AED programs.

Regardless if the officer is carrying an AED in the trunk, they can always use one that may be on-scene in an incident. They are becoming more common in public places such as office buildings, malls, theaters, recreation centers and a host of other locations. AEDs are easy to use, safe, and they will not shock a patient if it’s not needed.

looks forward to working with California law enforcement officers to make AEDs as standard and accessible as any other piece of protective equipment. 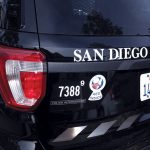 Loralee Olejnik, M.A., EMT-B, is the community relations specialist and a law enforcement liaison for San Diego Project Heart Beat. For more information about how your agency can launch an AED program, contact her at heartbeatadmin@sandiego.gov.