A New Chapter, Another Memorial

In 1986, Governor George Deukmejian called upon Senator Robert Presley to again sponsor legislation establishing a suitable memorial to peace officers who died in the line of duty.

The establishment of the nine-member California Peace Officers’ Commission from this legislation developed into a new chapter in the memorial story. Just as the task of raising money to build the original memorial years before was a huge undertaking, the commissioners had to set their sights on building a memorial monument that would stand for many years to come.

Appointments to the commission were made from various cross-sections of the law enforcement community. Assembly Speaker Willie Brown and Senate Pro Tem David Roberti selected two members each, with the governor presenting a list of five peace officers as commissioners.

The nine-member group consisted of eight peace officers and one police widow: Dick Moore, chief of Atherton P.D., and Phil Jordon, a police officer with the City of Vallejo, were elected chairman and vice-chairman respectively. Lieutenant George Aliano of the Los Angeles Police Protective League was elected secretary, and Bob Applegate of the California Association of Highway Patrolmen, a state traffic officer, was named to serve as the commission treasurer. 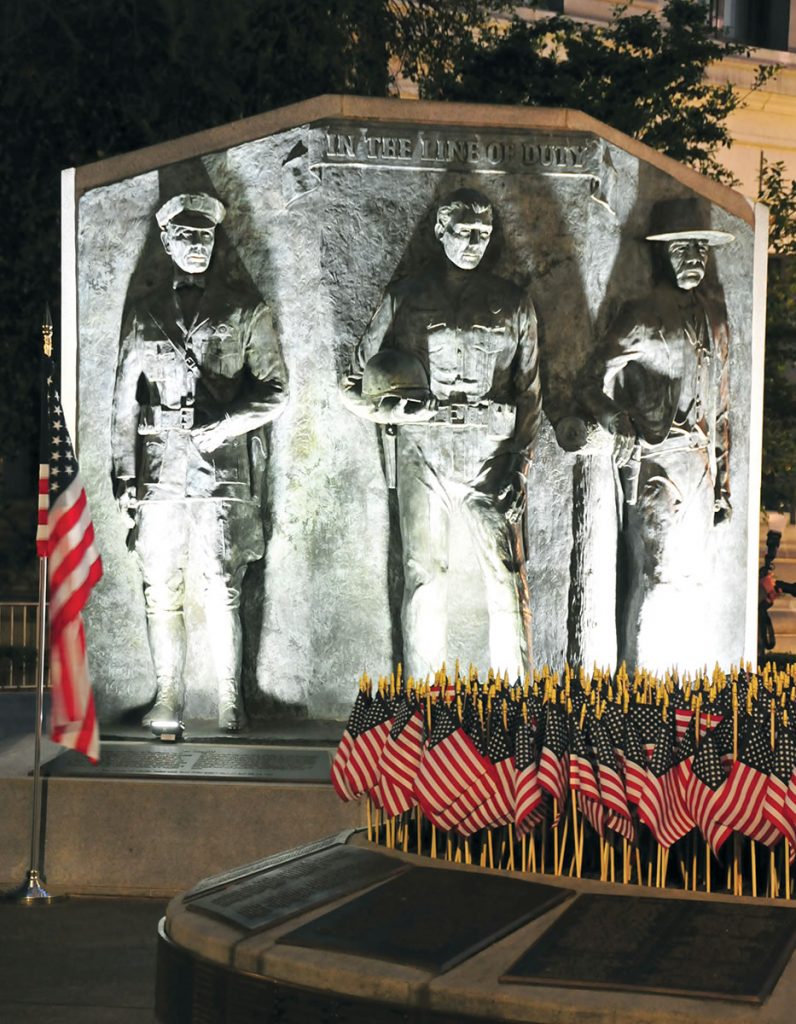 The executive officer was a unanimous selection: Al LeBas, retired division chief with the Los Angeles County Sheriff’s Department and law enforcement liaison for Governor Deukmejian. LeBas was responsible for the general accounting of funds, scheduling of meetings, and a great deal of coordinating between the commission, the state, private agencies, and the sculptors and artists who submitted designs.

During the term of the commission, general expenses of members proved to be very low. Each member’s own organization took turns hosting meetings; since all meetings were kept to one day each, the only major expense was airfare. The commission was also fortunate to have the Peace Officer Standards and Training (POST) organization provide the accounting services.

The first major agenda item was the design of the monument. The group was presented with five designs. Each had unique qualities and reflected the sculptor’s thoughts about the death and history of the peace officer. Each sculptor/artist was also asked to present a financial estimate of the proposal and ideas on funding the project.

The design selected provided the viewer with a simple view of California law enforcement and its history, as well as the tragedy of losing an officer in the line of duty. The artist selected gave the best overall image of the project and an outstanding financial package as well. Vic Riesau, retired LASD Division Chief turned sculptor, was very generous with ideas and very receptive to thoughts from the commission. His funding package was very acceptable because it provided the necessary plan to raise money to build the monument, while allowing each major contributor the opportunity to possess one of 500 numbered two-piece replicas of the statue.

A massive publicity and marketing campaign was started next. Law enforcement agencies in California were notified, as well as POAs, DSAs and many other statewide associations. It was initially hoped that all money raised would come from peace officers themselves.

After the design was circulated throughout California, many groups began reserving one or more of the 500 two-piece sets. Photos of Vic Riesau’s design were published in many statewide publications, giving the contributors a view of what they were supporting.

The effort to keep this a “cop­-funded only” project fell short, however. Even with the generous support of second and third donations from several associations, the commission had to turn to “in kind” and “at cost” contributors from the private sector.

Added costs of several unanticipated changes in the project made the May 1988 deadline even more difficult. As dedication day neared, the contributions slowed, but many major contributors increased their donation to reflect newly designed “silver shield” and “gold star” categories. Bronze plaques on the back of the monument commemorate their support.

The weather was also a major factor in May 1988. The day before the dedication ceremony and enrollment of officers who died in the line of duty during 1987, heavy rains threatened to spoil the many months of preparation. Workers spent many hours toiling over every detail, working late into the night, knowing that at 2:30 p.m. on Tuesday, May 13, several thousand people would be looking at their craftsmanship.

That dedication and support was truly reflected when Governor Deukmejian released the cover from atop the monument. At that moment more than 2,500 people, some seated and some standing, just stared at the three figures looking out into the grassy and tree-lined park. For a few brief seconds there seemed to be total silence, followed by thunderous applause.

As the woman and child figures and each individual plaque bearing hundreds of peace officers’ names were unveiled, the pride and sense of honor that began to emerge from everyone present was almost overwhelming. As families, friends and many peace officers began to push forward with the hope of getting a closer look, some had smiles, some had tears, while others just stood and stared.

At that moment, all of California had their memorial to honor their keepers of the peace. Just about everyone had to reach out and touch a leg, shoe or hand of the three-figured statue, or the woman and child sitting on the park bench a few feet away.

The speeches, handshakes and kind words of sympathy all but faded from memory, but the sense of unity and oneness remained as uniformed officers and deputies, wives, mothers and fathers, children and friends slowly moved about.

The Peace Officers’ Memorial Commission is now a vested part of California history. Its task is finished. Hopefully, the public, as well as the more than 60,000 peace officers in California, are grateful for the long hours and attention to detail shown by all of those involved with the project.

In 1987, Rick Baratta reflected on the memorial’s significance in a speech at the annual memorial ceremony:

It’s a good job, really. Except for the wear and tear on the soul, and a little more — always a little more, as the list of names attests. An average of 15 officers a year will be killed enforcing the people’s law in California, for the laws they pass two by two we pay for one by one.

No bells will toll for them. Their names will never be recorded. No solemn ceremonies will be held. They are the discards and rejects of our profession, whose human frailties could not weather the unendurable stand in arms.

Still, the shield the peace officer wears today stands as the shield of the Spartans stood between their people and their people’s enemy. And I tell you, their task is noble. Their task is august, and the names we place each year in the memorial book of the dead attests that they are pledged to that final commitment. And their word, pledged and kept, is a measure of their worth.